Edward Gorey (American, 1925–2000) The House Party Six high-society lizards, each with their own impressive attire and distinct personality, invite you to join them at an eclectic house party. Whether in matching loungewear, offering a fine chapeau, or fiddling with a decorative fan, this eccentric group seems to be enjoying each other’s company—or are they? It’s up to you to decide as you piece together this quirky drawing by Edward St. John Gorey, whose art is widely beloved for its magic, mischief, and mystery.

Artist and author Edward Gorey (American, 1925–2000) is beloved for the boundless imagination and sharp humor exhibited in his more than 100 published works. Gorey was also a set and costume designer for innumerable theater productions, including a staging of Bram Stoker’s Dracula, for which he won a Tony. He had a profound affection for literature, film, ballet, and animals. Cats and other odd creatures appear in many of his crosshatched illustrations. His humorously unsettling drawings of vaguely Victorian innocents facing unfortunate ends became familiar to a wide audience after appearing in the opening credits of the PBS television series Mystery! Gorey’s Cape Cod home, a veritable cabinet of curiosities, is now a museum celebrating his life and work. 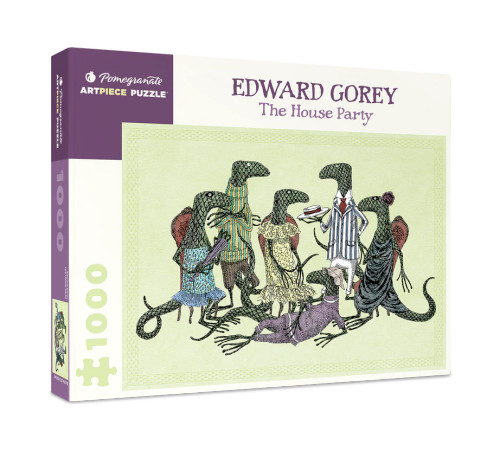